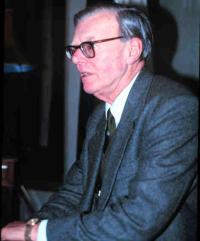 A.H.M Kirk-Greene was one of the leading Africanists at Oxford for about four decades. This African Studies Centre seminar room is named after him. His passing was announced this morning by the Warden of St Antony’s College - where he was a Governing Board Fellow from 1972 until his retirement in 1992.

In the announcement, St Antony’s Warden, Professor Roger Goodman, recalled that “Tony was a Senior Research Fellow at St Antony’s from 1967 to 1982, and a Governing Body Fellow from 1972 until his retirement in 1992.  He was a regular visitor to the College as an Emeritus Fellow from 1992 onwards.”

The statement added: “Tony served as a Captain in the Indian Army from 1943 to 1947 and graduated from Cambridge University in 1950, gaining his Bachelor and Masters of Arts degrees in 1954.

“He was Senior District Commissioner and Secretary of State for the Colonies from 1950–1960, and a Senior Lecturer at Ahmadu Bello University, in Nigeria, from 1961 to 1965.  He came to St Antony’s in 1967 as a Professor of History, and an Adjunct Professor from 1992 to 1999 at the Stanford Program at Oxford. Tony was known for his works on 20th century British colonial history.  He was president of the African Studies Association of the UK from 1988 to 1990, and vice-president of the Royal African Society.”

The full obituary from St. Antony's college can be found here

Tributes can be found here