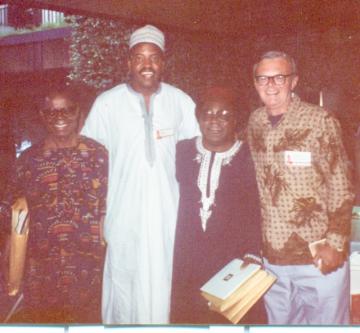 A TRIBUTE BY ALIYU MODIBBO UMAR*

In writing this tribute, it’s quite befitting to refer to our late teacher, colleague, and friend A.H.M. Kirk Green as mutumin kirki, Hausa Language words for a good man. For those who have known Kirk-Green over the years, are  aware that

Mutumin Kirki is a title of a book he wrote and was published in 1974.

My first encounter with Kirk-Green was as a result of a research on a paper I was writing 31 years ago, while pursuing a Masters Degree in African Area Studies at University of California, Los Angeles (UCLA).  In spite of the fact that the years have piled up, I still vividly recalled my effort to compare and contrast the virtues of Aristotle’s Nicomachean Ethics to the Fulani concept of Pulaaku. While frantically searching for materials for this topic, I happily stumbled on Kirk-Green’s Mutumin Kirki, discussing the concept of a good man in Hausa Society.

In the book, Kirk-Green stated his understanding of what the Hausa people refer to as a good man through these virtues:

Around 1988, I met Prof Kirk Green at a Conference on Nigeria, organized by Stanford University. After exchanging pleasantries at the margin of the conference, I came to realize that indeed, Prof Kirk-Green embodies all the virtues of a good man. To my surprise, he spoke Fulfulde, my language, as a result of his position as the colonial district officer in Adamawa Province in the 1950’s. He told me that the then Lamido of Adamawa bestowed on him the title of Ardo (leader) during his sojourn. The two days conference afforded me the opportunity to discuss extensively on some of his scholarly works that were of interest to me.

While still at UCLA, I kept in touch with the erudite Professor but lost touch after returning to Nigeria in 1992.  His death is no doubt a big lost to the Africanist Community worldwide, but we must take solace in the fact that Ardo A.H.M Kirk-Green has contributed immensely to understanding Africa and its people. My condolences to the family and friends of this seeker of true knowledge.