Youth, Livelihoods and Violence in Nigeria

Youth, Livelihoods and Violence in Nigeria 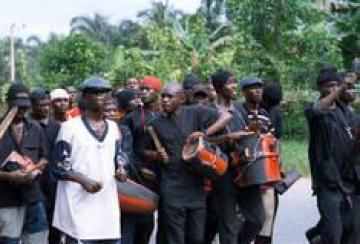 This project conducted by Dr David Pratten has explored inter-generational tensions and the mobilization of youth as a political category in southern Nigeria. Its focus has been to document the livelihoods and modes of sociality among young men in order for us better to understand the reported ‘crisis of youth’ on the African continent. In the course of the research new perspectives have been examined in relation to vigilantism, cults and masquerade. The findings of the research point to the way in which marginalized young men express their identity and cope with insecurity through a rich interplay of ideas about power and identity along with often violent strategies to seek accountability from patrons.

Perhaps the most significant aspect of this research has been to provide an historically grounded understanding of the making of youth as a political category. The process by which ‘youth’ has been configured is a complex one, and in recent years has been heavily influenced by discourse and violence in the Niger Delta region proper. Another important feature of this research has been to understand why young men in this highly Christianized region should invest so much of their time and energy engaging in forms of African traditional religion. The research has begun to ask important questions about the current salience of forms of protection (especially for vigilantes) and modes of sociality (in new cult groups like agaba). Indeed, these practices begin to make sense when they are linked into understandings of local epistemologies of power and masculinity and into young men’s stories of the radical insecurity they experience (especially when working in cities like Port Harcourt).