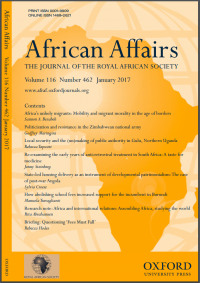 Jonny Steinberg, Professor of African Studies and Director of the African Studies Centre, has published an article on ‘Re-examining the early years of anti-retroviral treatment in South Africa: A taste for medicine’ in African Affairs.

Abstract: Antiretroviral treatment (ART) has become a ubiquitous feature of South African life. By early 2015, three million people had begun ART in South Africa. In the light of widespread positive responses to the availability of treatment, early ethnographies that stressed suspicion, fear, and resentment need to be revisited. In this article, I re-examine my own data on an early encounter between the technologies of ART and the population of a rural district in the Eastern Cape province. I also return to Didier Fassin's ethnography in which he placed ordinary people's responses to AIDS in a history of suspicion and resentment. The article focuses in particular on the support groups that ART users formed and argues that they were the sites of creative responses to ART in which ordinary people, primarily women, bent the new technologies and esoteric languages they encountered to an array of endogenous purposes. The article concludes that ART was incorporated into a politics of hopeful expectation rather than a politics of resentment.