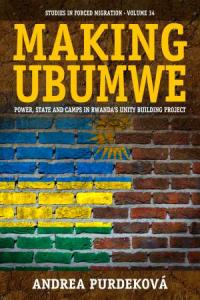 The African Studies Centre are delighted to announce that MAKING UBUMWE: Power, State and Camps in Rwanda's Unity-Building Project, by Dr Andrea Purdeková, has been named a finalist for the African Studies Association’s 2016 Bethwell. A. Ogot Book Prize. Published in late 2015, Dr Purdeková's book explores the concept of unity in post-genocide Rwanda.

This annual book award, named in honour of leading Kenyan historian Prof. Bethwell A. Ogot, is presented to the author of the the best scholarly work in East African studies from the previous calendar year. The winner of the Ogot Award is due to be announced at the ASA Annual Meeting on 3 December 2016.