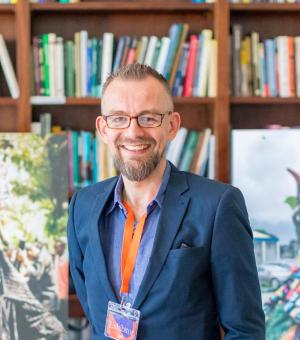 Associate Professor in Social Anthropology of Africa - On secondment as Head of School, School of Anthropology and Museum Ethnography

I joined the African Studies Centre in 2005-06. I am a social anthropologist and my post is a joint appointment with the Institute of Social Anthropology. I studied at Oxford, Manchester and SOAS, and previously taught at the universities of Edinburgh and Sussex.

My research is based on a long-term engagement with Annang villagers in south-eastern Nigeria and focuses on themes of history, violence and the state. The focus of my initial work was an historical ethnography of colonialism which focused on the events surrounding a series of mysterious deaths in south-eastern Nigeria during the late 1940s. More recently my research has examined issues of youth, democracy and disorder in post-colonial Nigeria with a particular focus on vigilantism and new masquerade performances.

I am currently working on several research programmes including conducting research in Nigeria, under a French National Research Agency (ANR) project, called 'The politics of xenophobic exclusion in Africa: mobilisation, local orders and violence'.  I am also a co-organiser of the African Print Culture Network which has organised workshops and panels at conferences over the past five years, culminating in the Cadbury Conference 2013 on African Newspaper Cultures held in Birmingham. The network has been supported by the John Fell Fund. My own research on this theme is a collaborative study with Professor Stephanie Newell (University of Sussex) into the life and works of J.V. Clinton; a provincial newspaper editor and writer.

I am also working on the histories and politics of masks and masked performances from south-eastern Nigeria. Recently I worked with colleagues at the Pitt Rivers Museum on aspects of their collection and displays. For further details including photos and videos see: Learning from the Experts: Nigerian Masks and Masquerade. I contributed to a programme about Masks on The Why Factor, broadcast on the BBC World Service in January 2014.

My publications include a monograph on the investigations into ritual murders in colonial Nigeria: The Man-Leopard Murders: History and Society in Colonial Nigeria published by Edinburgh University Press for the International African Institute, 2007. This book won the 2007 Amaury Talbot Prize awarded by the Royal Anthropological Institute.

I have also co-edited a volume of essays on vigilantism, Global Vigilantes: Perspectives on Justice and Violence published by Hurst & Co., 2007 along with two recent journal special issues. The first was on the influence of Michel de Certeau's theories on anthropologists published in Social Anthropology (Vol. 15.1 2007) and the other is on ‘Perspectives on Vigilantism in Nigeria’ in Africa (Vol. 78.1 2008).

I teach on the MSc in African Studies and convene the core course on research methodology along with an option course in the Culture and Society of West Africa which is available to students from a range of graduate programmes. I teach and supervise MPhil and DPhil students in the Institute of Social and Cultural Anthropology and lecture on anthropological theory. I was awarded a Teaching Excellence Award in 2009.

Since 2010 I have been Co-Editor of AFRICA: Journal of the International African Institute which is the premier journal devoted to the study of African societies and culture.