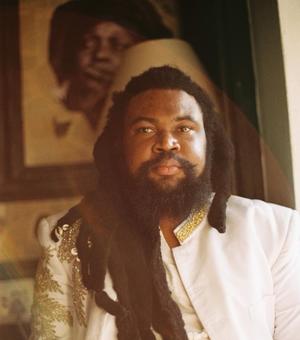 Onyeka Nwelue is a current Academic Visitor at the African Studies Centre and author of over 11 books, of which The Strangers of Braamfontein (Abibiman Publishing, 2021) is his latest and UK debut.

He is a filmmaker, publisher, talk-show host, bookseller and author whose book Hip-Hop is Only for Children won the Creative Non-Fiction Book of the Year at the 2015 Nigerian Writers’ Awards. He adapted his novella Island of Happiness into an Igbo-language film, Agwaetiti Obiụtọ, which won Best Feature Film by a Director at the 2018 Newark International Film Festival and went on to be nominated for Best First Feature Film by a Director and the Ousmane Sembene Award for Best Film in an African Language at the 2018 Africa Movie Academy Awards.

Island of Happiness was inspired by true events in Oguta.

Nwelue is the founder of La Cave Musik, a record label based in Paris, France, and co-founded the London-based publishing house Abibiman Publishing.

Nwelue studied Sociology and Anthropology at the University of Nigeria, Nsukka, and earned a scholarship to study Directing at the Prague Film School in Czech Republic.

He is currently a visiting assistant professor and Visiting Fellow of African Literature and studies in the English Language Department of the Faculty of Humanities, Manipur University in Imphal, India. He was a Visiting Research Fellow at the Center for International Studies, Ohio University, where he spent time in Athens, Ohio.

He was recently a Research Associate at the University of Johannesburg.

He is very passionate about seeing that people embrace the fruits of their creative endeavours, hence why he started his company, Blues & Hills Consultancy, which champions the promotion of arts and creativity. He has worked with some of Africa's biggest musicians and organised concerts in Nigeria and elsewhere. The Diplomatic Jazz Nights which he is a free jazz concert, organised in embassies, FREE. He personally funds the concerts and he has lined up the best performing artistes in Nigeria.

His company has been featured on MTV. The video could be found here: http://vimeo.com/54686313

He has spoken at Sri Venkateswara College, University of Delhi. The video could be found here: https://www.youtube.com/watch?v=-HSQTwLVIQs and also at TEDxJabi: http://www.nollywoodaccess.com/watch-onyeka-nwelue-on-tedx/

He has taught in universities, FREE of charge, personally financing his trip, through his mobile school, The Free Mobile School.

He has engaged in a thorough, in-depth analysis of the intricate inter-relationship between entrepreneurship and the creative industry and its history, language and culture as well in Africa, exploring the cultures of Africa and its literature. Exploring this has been necessitated by the need for everyone (here used to denote individuals in the creative industry) to harness the full capacity of their talents, turning their craft into sustainable business.

No original research was carried out, but as an African who has lectured African studies both in Africa and Asia, he has brought his knowledge to create jobs, particularly in film and digital media in a very unconventional way.

He has won The Prince Claus Ticket Grant and a grant from the Institute for Research in Women, Children and Culture (IRAWCC).

He continues to preach that it is also important that the socio-political atmosphere be conducive to creativity. In the countries of Africa where electricity is practically non-existent and ethno-tribal conflicts are frequent, creativity suffers. And as creativity is muffled and suffocated in these lands, entrepreneurship in the creative industry is certainly fettered as well. Therefore, it is needful that the governments of Africa sanitize their countries, dealing intra-national conflicts a resounding death-blow. Infrastructural development should be championed, in order to provide electricity, fast and cheap internet services, and all other aspects of modern day life important for comfortable living.

The documentary itself premiered at Harvard University and also showed at Ohio University.

Last shared news about Onyeka Nwelue, he was calling for the “lynching” of Ice Prince over an alleged no show concert in Paris, literally. Apparently this ...

The Nigerian exodus: How a country chased away its premier ...

The Nigerian exodus: How a country chased away its premier artists

Deep Blue Sea: The Nollywood of our dream

(Presented at the sandbox Global Summit, Lisbon, Portugal from January 20-23)

Blues and Hills: The Nigeria’s music industry is a mirage

Opinion: Bridges and Barricades-music in Africa

A Brilliant Burst of Fire: A review of Chigozie Obioma’s the fishermen

The Effective Use of your country’s consulate abroad

Before the storm (My experience as an atheist)

How Wole Soyinka saved my life

The Misunderstood world of Linda Ikeji

The Purity of Asa